I went to San Francisco with my girlfriends, Glenda and Alice, over the 4th of July week. Glenda and I left Mesa on Saturday morning and drove as far as Burbank. We went out for dinner and to a movie that evening (“Knight and Day” with Tom Cruise and Cameron Diaz) before returning to our hotel room. We got on the road the next morning in time to make it to the San Jose airport to pick up Alice, who flew in from Portland, at 3:30. We drove directly to our hotel in Pacifica and checked in. We could see the ocean from our room, but not well. Before we went looking for dinner, we stopped at the front desk to see if they had a better room available, and were told there would be one the next day.

We knew we were too late to make it up into the city to view fireworks, so we headed to the High Tide Cafe &  Creperie (specializing in omelets and crepes) close by for a bite to eat. After that we walked down to a public beach where folks had gathered with their own fireworks. It was rather amazing to us that fireworks are not illegal in California and everyone was shooting off cherry bombs, sizzlers and small rockets everywhere.  We decided not to stick around and risk getting struck, and headed back to our hotel area, stopping for one geocache along the way. Monday morning, we switched to a room on the outside of the hotel where our window overlooked the ocean. If the internet connection had been faster, the hotel would have been perfect. We really loved it. 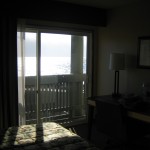 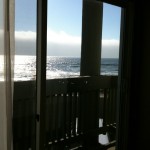 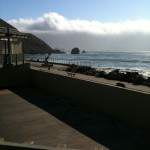 After dropping our luggage in our new room, we headed into the city, and started our touring for the day at Fisherman’s Wharf. It was so cold, foggy, windy and overcast, that Glenda and I bought fleece jackets from a street vendor to wear over our sweaters and sweatshirts. We wandered around for a bit, then got a sourdough bread bowl full of clam chowder (for Alice and Glenda) and chili (for me) at Boudin. 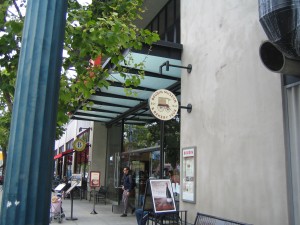 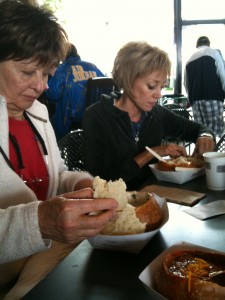 Then we got tickets for the double decker hop on-hop off sightseeing bus. The tickets were good for two consecutive days, so we decided to stay on the bus for the full circuit of the city the first day, and hop on-hop off on Tuesday. We started out up top, but had to move down where it was warmer and out of the wind before crossing the Golden Gate Bridge. Alice snapped our picture with my camera as we rode around. 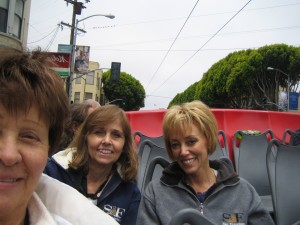 Along the way we passed the spectacular building that houses City Hall, the Pyramid building, and Union Square. 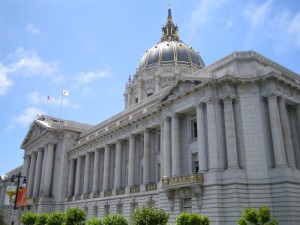 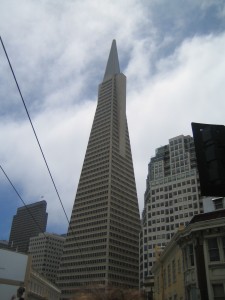 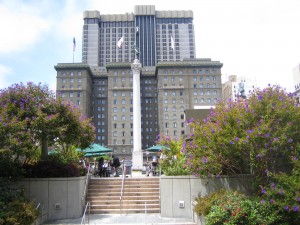 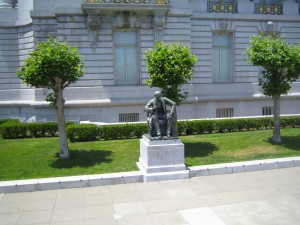 We got a great taste of what San Francisco looks like. 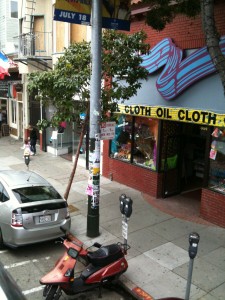 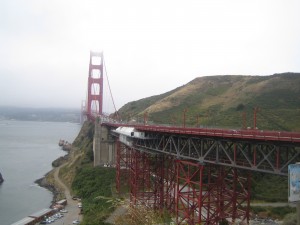 On the return loop, we hopped off at Ghiradelli Square, where YES! they do give out free chocolate samples. Of course, that just makes you want to buy more chocolate, which we did. 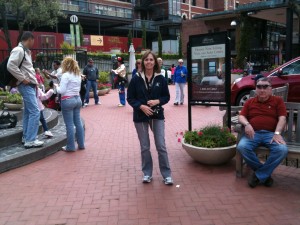 We thought we would eat at the Cliff House, and drove up there. It was still early (about 5:00) and we weren’t hungry enough to make the steep prices worthwhile, so after looking over the Sutro Baths, 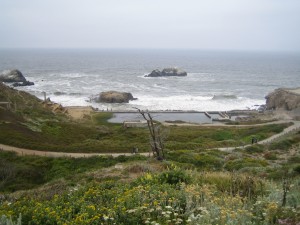 we headed south and ate at Outback near our hotel, then hit the sack to get rested up for day 2.