From the Redwood Forest to the Desert Highway

15. July 2009 · Comments Off on From the Redwood Forest to the Desert Highway · Categories: Life & Family, Travel

This land was made for you and me… 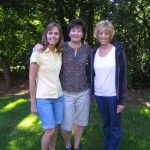 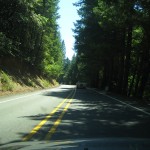 Around mid morning, the trees started changing from deciduous to conifer, and by noon they were thick and towering. We had a constant flow of traffic and a winding road which made it a little hard for the driver to really look around much of the time. But we made a couple of stops to take photos and also took some pictures through the windshield. I wish I’d gotten a picture of Glenda holding her camera out the window taking pictures as we were driving along at 55 mph. 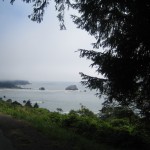 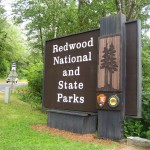 The GPS pointed out a turn off the highway with a 6 mile drive on an unpaved road to the entrance to Redwood National Park. We were skeptical that it was the best way to get there, and after a half mile, decided we were not going to see anything different driving 5 1/2 more miles on a dirt road than we were seeing right along the 101. So we made a U-turn and got back on our route south. (Yes, I had to reprogram the GPS to head for our hotel in Petaluma.) 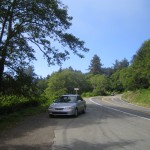 We decided to stop in the early afternoon for coffee. We found a little coffee house in a small town and pulled in. Glenda got a latte and I got a mocha frappuccino, and we tried to get back on the road. We had some confusion with Miss GPS as she steered us wrong for the first time. Maybe the signage had changed or we didn’t hear the direction clearly, but we found ourselves going north on the 101 and had to drive 2 miles before we could turn around. 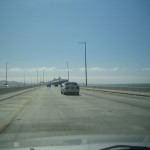 We drove on to Petaluma where we spent our last night where the temperature stayed below 100. The next morning, we drove toward San Francisco, but the GPS took us across the Richmond Bridge, instead of going by way of the Golden Gate and Bay bridges. Glenda was disappointed, and we started talking about making a trip to San Francisco next spring. We’re going to see if Daryl and Gisele would consider making one of their many sojourns to the Bay area and be our tour guides. 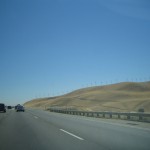 The remainder of the trip scenery was pretty boring, so we listened to an audio book, talked, and traded off drivers (Glenda slept when I drove and I worked on my bible study when she drove – both very worthwhile and rewarding undertakings). 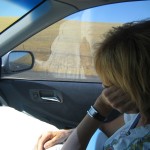 Our final night was spent in Palm Desert. We drove about 5 miles off the interstate and found a beautiful community in the middle of the hot desert. We checked into our hotel and drove around looking for someplace to eat. We ended up at a local Mexican restaurant, then went back to our room to watch the first episode of “Kings“, streaming the video from hulu.com on my laptop. Too bad this good show didn’t make it, but NBC is showing the 13 episodes that were completed and then releasing them on DVD.

We got back into Mesa about 1:00. I dropped Glenda at her house, then went home to unpack my raspberries. Unfortunately, the dry ice had evaporated, and the berries were thawed! Nearly mush. 🙁 They had to be used immediately, so I quickly made a raspberry cobbler and two cream cheese pies, packed them up and headed over to Brian and Carrie’s to see the grandkids and take a swim.

I discovered Andrew had started rolling over while I was away! He has done it dozens of times, so we know it’s not a fluke. Here’s proof.