I’m going to attempt to record some of our trip, but since it’s been over a week since I’ve been home, I’m sure I have forgotten some of the juicier parts. 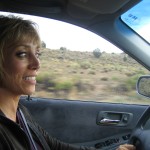 Glenda and I loaded up and headed out at about 8:30 on Friday morning. It was hot in the Valley of the Sun, so we were very glad to be heading north. Just out of Flagstaff, it started to rain and continued off and on 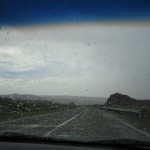 for the next few hours. When we turned on the windshield wipers, the driver’s side blade was split and the strip of rubber made more mess than clean, so as soon as we came to a town, we asked the GPS to find us an auto parts store, and stopped to buy new blades. Glenda belongs to AAA, so her discount saved me some money. The clerk even installed them for us (in the rain) while we waited safe and dry inside. Back on the road, everything was much clearer then.

We had planned to drive through Zion National Park, but as we got close we realized the rain was going to severely impact our view of the scenery, and the detour would add at least an hour to our drive that day, so we decided to bypass it and head straight for our hotel in Provo.

It was after 8:00 when we arrived and after checking in, we let our trusty GPS direct us to a Denny’s for “brinner” (breakfast for dinner). And we found our way back to the Hampton Inn with no wrong turns.

Day 2 started with breakfast in the hotel and a photo op as we were leaving. We were trying to 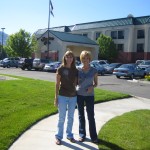 hold our cameras at arm’s length to get pictures of both of us with the hotel behind when a nice man stopped and offered to take our picture for us. I’ve always been a little leary of handing my camera to a stranger to take my picture because I’ve heard stories of people running off with nice cameras that way. But he was intentional in his nice offer and got a good shot of the two of us, before handing our cameras back to us.

Our drive to Boise was without incident or adventure until we pulled into Robin and Ken’s neighborhood at 3:15. My GPS was still directing us, but I was ignoring it since I know exactly where the Holsingers live. Or at least I thought I did. Imagine my surprise when I turned down their street and discovered they had painted their house and parked a new car in the driveway! That was when I realized I had turned one street too early. Actually, I just wanted Glenda to relive the glory of our usual trips in bygone days. 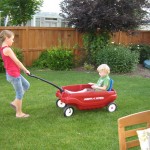 Robin had to leave for church an hour after we arrived, so Glenda and I settled into our room, played with the kids and picked strawberries in their back yard berry patch. We picked Robin up at 6 and went out for dinner. 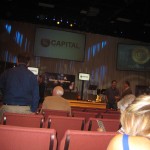 We went to church on Sunday morning and got to experience a Spirit-filled service. They had a guest speaker from a very charismatic church in Las Vegas, and he had folks rolling in the aisle, dropping to their knees, falling on their backs, and recommitting their lives to Christ. It was quite an event, and we had fun watching and then discussing with Ken and Robin afterwards. They were as “impressed” as we were, and said that has never happened in their church before. Lucky us to have hit it on that particular Sunday. (I must give a caveat here: I love visiting Capitol Christian Center, their typical style of worship, the pastors and all the people, and especially their childrens’ ministry programs (Robin’s area). But it actually was kind of fun to see a full gospel demonstration.) 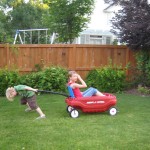 We had lunch out, toured Ken’s new offices (and reported the ceiling leak in the lobby conference room to the facilities folks — good thing we stopped by!) and then relaxed at home on Sunday afternoon. Glenda, Robin and I found ourselves upstairs playing with the kids and their Playmobil toys for a good while. What fun to be 4 or 10 again!

After a second night at their house, we were on our way to Portland on Monday morning.