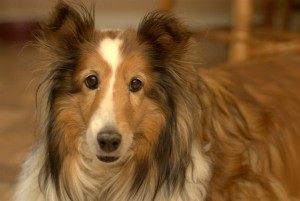 Hope was a gift to me. When Hollie lost her last litter  and could never give me another puppy, Carrie and Brian rounded up donations and surprised me with six week old Hope. She came to provide companionship to Hollie, who was alone at the house all day while I was working. She had a different temperament than Hollie, who was affectionate, but a bit higher strung. Hope was mellow and friendly to everyone. Unlike Hollie, she never so much as curled her lip at a child, even if she was being poked or pulled or sat on.  She was a real sweetheart.

She developed a lipoma – a large fatty tumor – on her hind leg. When we discovered it, it seemed like too extensive a surgery for an old dog to undergo, so I opted not to treat it. I thought she would be gone in six or eight weeks. She lived four more years. But the last month she had gone downhill quickly. She had no quality of life anymore, and I knew it was time to let her go. Daryl and Derek went to the vet with me on Saturday afternoon and we were with her as she was put to sleep. We all wept as she slipped away.

I sure miss her. I have lost several pets in my life, but this one is especially hard. Always before, whenever I lost one, I still had another one at home. This time, I’m alone. No one to greet in the morning. No one to say “Hi, girly girl” to when I get home from work. No one to feed at bedtime. No one to put up the gate for. No one to announce a knock at the door, or joggers on the canal behind the house. No one to give me that sweet look that says “You are my whole world.” I find myself continually looking for her. I’m leaving this weekend for a week in San Diego, and I’m hoping by the time I come home, the house will seem more normal. But right now, I really miss her.

Bad Behavior has blocked 23 access attempts in the last 7 days.