Brian and Carrie have started a new blog. Yippee! You can read along by clicking here!

Carrie and Brian have been looking at school options for Nathan. He is academically advanced, and they want to make sure he is challenged, not bored. They recently heard about the Paragon Science Academy, which is opening this year as a charter school. The school has a strong focus on science, technology and the arts, to prepare more students to meet the demands of today’s changing world and grasp new opportunities in these fields.

Carrie took Nathan yesterday to have him tested for placement, and he tested halfway through first grade level in reading and math. He is eligible for the advanced kindergarten class, and has secured a spot. School starts on August 11, and he is very excited, especially about the robotics and microscopes. He has already told his mom when he grows up, he wants to work on finding a cure for Sanfilippo Syndrome.

Wow, did it rain this afternoon! This was taken at about 4:00. 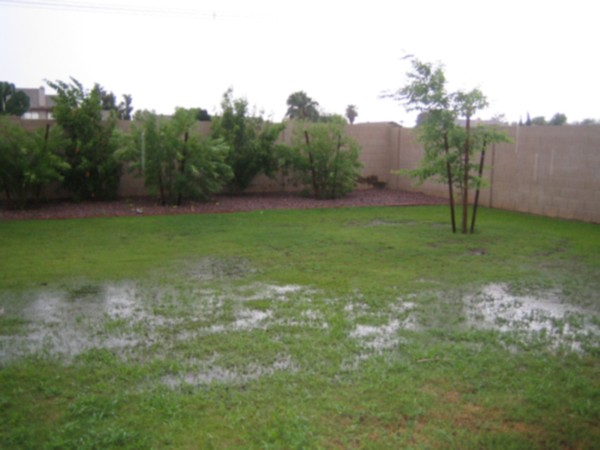 Lauren is doing so much better than a couple months ago. She is no longer having the night terrors/seizures and is running around the house. But best of all, she is singing again. Maybe just a line or two at a time, but you can hear the tune and make out the sounds of the words. And last Thursday, she said “Poppa” and “Daddy”. She hasn’t said a recognizable word in several months. This is a real comeback!

She’s got a new pillow top mattress that is more like the one in Brian and Carrie’s room and they are introducing her back to her own bed. So far, so good. Looks like life is getting back to normal at the Reed’s.

We had a good time in Disneyland. As I said in yesterday’s post, I kept making mental notes of things to blog about all day. I’m not sure how it happened, but we might have gotten lost in the Disneyland parking lot. We entered on the east side, and paid our $12 (yikes!) fee. The cheerful attendant told us to follow the signs around the park to the parking structure on the west side, where we would catch the tram to the entrance. We followed the road, and eventually found ourselves back at Ball Avenue. We had to make a U-turn back into the parking garage. But apparently, that is the only way to get there. Several cars were on the same route, and we even looked for another way when we came back in the afternoon after our hotel break, and there simply isn’t one. Seems like Disney would address that, or close the east entrance and just route everyone into the garage entrance from Ball Rd.

The park was really crowded, but the ride lines were not bad. We had a lot of fun in the morning, and along about 11:00, Glenda got a text message from a friend of her daughter’s who works for Disney. He is one of the web designers for disneyland.com. He had just found out we were at the park and wanted to meet up with us for lunch. We met him for lunch in Downtown Disney and afterwards, he walked us back over to California Adventure where he got us park hopper tickets for free! We had been dying to ride “Soarin'”, but didn’t want to spend the extra money to do both parks. We actually had a ton of fun in C.A. and spent several hours there. We rode “Soarin'” twice and several other rides including “Toy Story”, which is the newest ride at Disney. It’s very similar to Buzz Lightyear, but in 4D.

When we came off “Soarin'” the first time, we were looking the map over and a Cast Member stepped over and asked us if he could help us. We thanked him and explained we were just figuring out where the rides we wanted to check out were located. He grabbed my map and proceeded to give us a complete description of each and every ride in the park. I rolled my eyes over his head at Glenda twice, tried to gently pull my map back from him, considered being rude and walking away, but in the end just stood there and took it. After all, he was just trying to be helpful, but he went overboard just a bit. No, actually a lot!

We were plumb tuckered out by 10:30 and decided to call it a day. On our way out of Disneyland, we stopped to take a quick look at the 50 Years of Disney exhibit, and it was fascinating. They had a map of Walt Disney’s original concept of the park which included Mickey Mouse Island and Lilliputian Land. There were old ticket books, lots of photos and documents, and a model of the Space Mountain track without the mountain. It’s quite a mild roller coaster when you see it that way. It’s truly the dark that makes it so exciting. We stayed to watch the movie (hosted by Steve Martin and Donald Duck) and it was one of the highlights of our day.

We slept like logs last night and didn’t wake up until 8:15 this morning. We got on the road around 11:00 and finally started our audio book, The Pillars of the Earth. We only got through 4 of the 32 CDs, but it is so good we are both definitely going to listen to the rest of it on our own.

We took I-10 all the way home and didn’t get lost once.

We have had two great days. All along the way, I’ve looked for things to blog about, because I know no one really cares about our window shopping or which rides we went on at Disney.

We got up early on Monday and drove over to Coronado Island to walk around. We strolled through the hotel trying to act like we belonged there. It is so cool along the beach there, because the hotel has a boardwalk (okay, it’s a cement sidewalk, but it’s right along the beach) that meanders along the edge of the hotel and we had fun imagining what the inside of all the condos and cabanas were like. It was a very overcast day, so the ocean didn’t have a lot of color and it was quite cool. In spite of that, there were several groups of people heading down to the waves.

After a Starbucks and pastry, we headed up the coast to San Onofre State Beach to pay a visit to the campground hosts. We arrived at the entrance to the park around lunch time, and an hour and a half later we were at their site. They are 104 sites down the road at 15 MPH! (just kidding … it didn’t take us quite that long!)

We had a great time sharing lunch with Richard and Dianna (thanks so much!) and then took a little(?) hike down what they termed the “easy” trail to the beach. Whew! It was about a 75° angle down the side of the cliff. We made it safely and then walked along the beach checking out the different areas that Richard pointed out.

There were a couple of surfer camps going on and we watched the surfer dudes for a while. It looks like a lot of fun, but also a lot of hard work! We climbed back up the road (which was still steep, but not as difficult) and after saying our goodbyes, we went on up the coast highway to Newport Beach. Richard had given us a suggestion to drive along Highway One instead of keeping on the interstate like our mapquest directions, and it was a delightful drive through the beach cities.

We went out for dinner and headed to bed in preparation for our big day at Disney. Now, two days later we are ready to get on the road back to Mesa, so my recap of yesterday will have to wait until I get home. Arizona, here we come!

Bad Behavior has blocked 9 access attempts in the last 7 days.