Nathan and I went geocaching a couple weeks ago in a large “ghost town” just south of L.I.F.E. It’s an area that had started to be developed a couple years ago as a new home neighborhood, but when the market crashed, the builder abandoned it and it’s truly a ghost town now. There are a few paved streets, some of the water, sewer and power infrastructure started, and block walls half built, but it’s been mostly overgrown with tumbleweeds lately. Anyway, there are about 8 geocaches hidden around the acreage, and Nathan and I parked at L.I.F.E. and walked down into the area from there.

We found the first several caches easily enough, but came to one that turned out to be quite a puzzle, and ended up being one of the best hides we’ve seen. If you have a hankering to search for Modern Day Ghost Town 3.1…6 Feet Under, stop reading now, because I’m going to reveal exactly where it is and what the cache owners did to set it up, plus post pictures below.

The coordinates took us down to an area next to an irrigation canal. We hunted around the several pipes and protuberances using our mirror and work glove, but couldn’t locate it. Nathan wandered about 6-8 feet away and started checking a large metal lid that covered an in-ground equipment hole (I really don’t know what to call it … you’ll have to look at the pictures). I said, “Be careful, Nathan. I’m sure it’s not down there. Close that up.” Famous last words. I’m glad he didn’t make a bet with me!

We wandered around and searched some more, and then read some of the logs. That’s when I realized that hole was exactly where it was. But no way was I going down there, and I sure wasn’t letting Nathan climb down that metal ladder. So we decided to come back later with reinforcements (as in with Brian and/or Daryl).

Last Saturday, we did a tour of L.I.F.E. with Mom’s friend Barb, who was visiting from Pennsylvania, and since we had both Daryl and Brian with us, Nathan and I asked them to drive over to “Modern Day Ghost Town 3.1…6 Feet Under” with us.

When we pulled up, there were three other people there. They were obvious geocachers and confirmed it when I asked. They were also looking around the pipes that had first drawn me, and we tried to be patient while they searched. But when the wife said she had found it a few months ago, we began a little discussion about the hole under the lid. They couldn’t believe it, it had been moved. Daryl was the first one to be brave enough to descend the ladder. Brian quickly followed him. Sure enough, the cache was down there, and when they assured us it was safe, I climbed down, and then we talked Nathan into coming down, too.

The hole was about 6 feet by 8 feet (and about 7 feet deep); it held some kind of water pump equipment. When Daryl reached for the can that held the cache, he startled a rat. EEK!!! Wait a minute, it wasn’t a real rat. It was a fake rat hooked up to a little battery operated motor that shook and rattled when you bumped it. There was a second rat under another piece of equipment that also wiggled around when the first one was bumped.

We all signed the log, climbed out, replaced the lid, and went on our way laughing about the great job “Peasinapod” did on this. Here are some pictures. 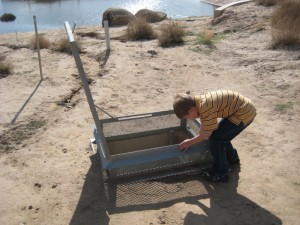 Nathan looking down in the “hole” 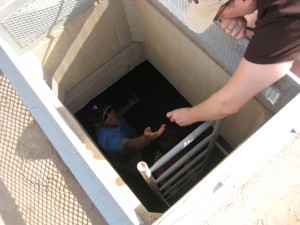 “babyhum” handing the log back down to Brian after signing. 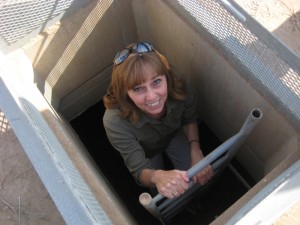 I got brave and decided to check it out. 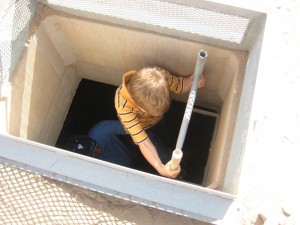 Brian helping Nathan down the ladder. 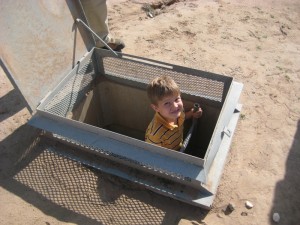 Coming back up out. 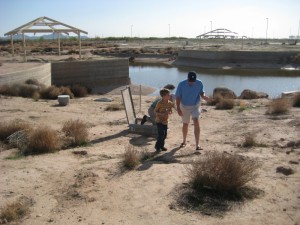 Closing it up for the next geocacher to experience the fun.

Bad Behavior has blocked 14 access attempts in the last 7 days.